For years, there has been a discussion about iPhone photography compared to Android photography. Both Android and iPhone devices have their strong sides when it comes to snapping pics and their quality. However, to get accurate results, we must compare similar models.

Comparing the newest iPhone with a 10-year-old Android isn’t quite fair, so for this iPhone and Android comparison, we’ll take the two newest models from Apple and Samsung.

The main camera is great on both the new iPhone and Samsung S-series, although there’s a slight difference in color. In perfect conditions, even professional photographers say that it’s a matter of preference.

However, it’s known that Android photography is easier to pull off because it offers a significantly larger number of features and pro options. This gives the user a simpler interface which makes even beginners take good pics. The iPhone, on the other hand, has the same interface for newer and older models. That is, there’s a difference in camera quality between models, but the software part is basically the same. 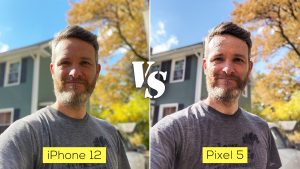 Most people use their smartphones for social media, and not just browsing, but for taking and uploading photos. In a perfect world, there shouldn’t be a difference between iPhone photography and Android photography, but there is.

Have you ever wondered why social media influencers usually use iPhones? Even though it’s a status symbol nowadays, it offers much better photo and video quality on third-party apps such as Instagram.

The reason for that is that Instagram was originally made for iOS users. It took a staggering two years before Instagram became available on Android, and to this day, this social media platform seems to favor iPhone photography. It seems pretty obvious the absolute winner here is the iPhone, even if the photo is taken with a lower-quality camera.

While most popular apps are available on both iPhone and Android, there are many more options to choose from if you own an Android device. Apple has strict rules and guidelines when it comes to placing apps on its app store. To expand the market to iPhone users, many apps have given iOS users advanced options that Android users don’t have access to.

Photo resolution is an important factor mostly for printing, however. Photo quality comparison won’t tell you much if you’re viewing images on a laptop, tablet, or mobile phone. Most digital images have a photo resolution of 72 PPI (pixels per inch), and they look very good. However, print uses DPI (dots per inch), and for an image to look good in print, this resolution needs to be 300 DPI or higher if possible. 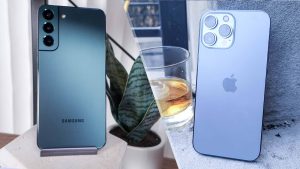 An iPhone will have more durable hardware than most Android devices. However, this is due to the fact that there are dozens of Android phone manufacturers and only a handful of iPhone models on the market.

When it comes to premium models, some things go in favor of iPhone devices, and others go in favor of Android. For example, iPhone screens crack more often and are usually much more expensive to replace. That’s why iPhone users commonly replace their devices with new ones when such damage occurs.

If you’re into iPhone photography, you’ll get to store more images on your device because of the better compression. The same resolution and quality between iPhone and Android photography lead to the result of the images taken with an iPhone being significantly smaller than those taken with any Android device.

Experienced photographers already know the settings they need for that extra gorgeous photo, but what about newbies? When it comes to the user interface, iPhone photography makes it much easier because it doesn’t offer too many options and has pre-built settings that allow everyone to take incredibly beautiful photos.

When it comes to more advanced settings, premium Android devices are usually the better choice because they offer a wider variety of Android photography settings as well as ultra-wide and telephoto options.

The photo quality comparison is pretty much expected — the more you’re willing to invest, the better the quality will be. However, the iPhone has a few advantages. Our recommendation would be to start your photography journey with an iPhone because it’s easier to use and can store significantly more photos compared to its Android competitors.

Doing an iPhone and Android comparison, it comes down to only a few differences. Premium Android phones such as the Samsung S21+ will seriously challenge the newest iPhone 13 Pro Max. Although both devices will produce visually stunning photos, the iPhone is a better choice for beginners who are just stepping into the photography scene. It will allow you to upload better-looking photos to social media, which is essential to building your fanbase and creating a name for yourself.

Once you’ve mastered angles, lighting, and advanced settings, you can invest in a better Android device to use alongside your iPhone or, better yet, a DSLR camera that will allow you to take the highest-quality images.

The great thing about starting with iPhone photography is that you can start with an older device as well. The user interface hasn’t changed for a long time, which will let you learn the basics of iPhone photography and editing without investing thousands into equipment.